The OFA – Ounousa Fashion Awards is a pioneering initiative that supports and promotes local Lebanese talent in Fashion, Accessories and Jewelry Design with a big potential.

Ounousa.com, the organizer of the visionary campaign, has sought to capitalize on its strong Digital Presence in the Arab world as the leading publishers in Arabic thanks to its influence on Social Media to showcase the best talents in the fashion scene in Lebanon.

The names of the winners were announced at the #OFA16 spectacular ceremony bringing together the most prominent personalities in the World of Fashion and Media.

Kanz Handbags, the Media figure Rabia Al Zayyat and designer Yara Ghossein, won the first place as they were selected by the jury for their innovative designs for bags. In recognition of its distinguished activity in the world of design, KANZ received the Prestigious 1st Prize consisting in Special Cultural trip to Spain in Summer 2017, offered by the Spanish Embassy in Beirut and organized by Ounousa.com jointly with KAMSYN PR. (video below).

From the 23rd of April till the 28th of April 2017, a full training program for the winning team was organized at ESNE Design University in collaboration with Ms. Veronica Melendez Valoria, Director of Communications at the University.

Below is the Video & Diary of this memorable trip by the Ounousa Team (Video: Karim Chehab; special Thanks Joan Makary) :

Is it possible to start a Cultural trip in Spain without heading to the Iconic Plaza Mayor in the capital Madrid?

Built in the 17th century it holds the most important official celebrations, and is deeply rooted in the heart of the Spanish people. After a tour of this area, the winning team took-off towards the ESNE School of Design where they participated in a workshop focused on fur, the selection of raw materials, fabrics and modern techniques used in design, which offer a wide range for experimentation and innovation. 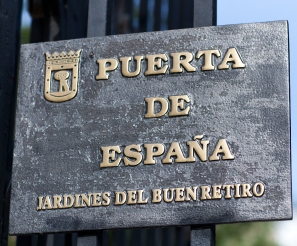 The first day was the occasion for an Exclusive Professional Photography session for KANZ Handbags in which were featured Rabia Zayyat and Yara Ghossein. Their promenade through the Majestic Parque del Retiro was captured through the expert lens of Emile E. Issa, Founder of KAMSYN PR, Strategic Communication Consultant & Photography Aficionado.

On the second day of the trip, the winning team participated in an intensive workshop at ESNE. They gained in-depth insight in the field of fashion design and accessories, especially in the fields of crafting patrons and sewing. The winners were happy to connect with the most influential Professors in the field who shared their International experiences and discussed new trends in the design world.

Strengthening & developing the special relations between Lebanon and Spain was one of the major goals of this outstanding cultural journey. Local Lebanese designers connected with International Fashion Brands and Institutions which Spain is famous globally for.

The winning team then visited the Lebanese Embassy in Spain. The team of Ounousa and the two winners were warmly welcomed by the charming & dynamic Lebanese Ambassador in Madrid at that time, H.E Joumane K. Zahlan. The exchange, which was moderated by Emile E. Issa, focused on many important topics related to Lebanese creativity and the potential of bringing talented designers’ work to International audiences, runways & Buyers.

The #OFA16 winners then visited the Museo Del Traje in Madrid, which is dedicated to fashion, with the exceptional welcome by the Director of the Fashion Design Program at the ESNE University, Mr. Raphael Garzia Lozano who organized the VIP access and gave the delegation his signature personalized tour in more than four languages.

Rabia & Yara discovered the evolutions of Spanish designs over time, which became an important source of inspiration and knowledge. This special tour was followed by an exclusive interview with Mr. Lozano to discuss the various dimensions associated with the world of design and trends in this area.

The cultural journey to Madrid would not be complete without the VIP visit of the Spanish Luxury House LOEWE, World-famous for its fine leather crafted collections and deeply appreciated for more than a century ,since it’s creation by the Spanish Royals and Celebrities.

The winning team has been granted exceptional VIP & Backstage passes to explore all the design and manufacturing details of this unique brand as well as to share their common passion with their hosts.