The UK Lebanon Tech Hub (UKLTH), a joint initiative by Banque du Liban (Lebanon’s Central Bank) and the British Embassy in Beirut, today announced that inside three years of operation it has boosted Lebanon’s knowledge economy by creating 1370 direct and indirect jobs. It also contributed more than US $8.5 million worth of deals in the UK and a $26 million increase in company revenues in Lebanon.

The hub, which helps grow tech innovations into global businesses primarily through London, accelerated 78 startups that raised more than $36 million and are currently valued at more than $200 million. The figures presented at the demo day of The Nucleus, the hub’s startup venture building programme, were welcomed by H.E Hugo Shorter, the dynamic British Ambassador to Lebanon, who said:

“The UKLTH has yielded exceptional results in just three short years. The flows of investment in both directions are an early sign of how much trade and investment could be generated through British-Lebanese tech co-operation.”

Following this strong performance, both Banque du Liban (BDL) and the British Embassy in Beirut, yesterday announced a further commitment to support the hub’s growth over the next three years.

Following its initial two-year mandate, the hub has now entered a new chapter as a permanent entity in which managing director Nadim Zaazaa has been promoted to permanent CEO. The hub is bolstering its global footprint with a global advisory board of British and Lebanese industry leaders, entrepreneurs, investors and academics. This ambition is reflected in the appointment of US-based Ramzi Haidamus, a renowned Silicon Valley entrepreneur and former President of Nokia Technologies, as the advisory board’s Chairman.

As the hub’s startups leap to international and digital markets, they are committed, under BDL’s support terms, to remain rooted in Lebanon where they create jobs, generate revenues and retain their intellectual property locally. Six out of its 78 startups that originated in London, Dubai, Paris and Seattle arrived to set up shop in Beirut and benefit from BDL funding.

Using London as a launchpad to global markets, particularly Europe and America, six of the startups have also gone on to establish their first international growth outposts from the hub’s offices in Moorgate, London. Some are now selling in the UK such as Slidr, a gamified e-commerce experience. Others are leveraging world class UK expertise to design and develop hardware innovations. Sensio Air, a device that measures allergens and pathogens in your direct environment, is now preparing to launch in the EU and US. This strategic relationship between Lebanon and the UK has seen the hub and its startups generate an overall deal flow of more than $8.5 million of foreign direct investment (FDI) into the UK, creating 24 new jobs in the process.

In February this year, the hub launched a centre for international applied research collaborations in all STEM related areas. Backed by a seed fund of £2.5m from the UK government, it aims to commercialize world-leading research conducted by Lebanese universities and industry players, partnering with British education institutions. In less than a year, the hub’s research centre launched five applied research collaborations covering health technologies such as a non-invasive device to continuously monitor blood sugar and a biomarker device that can detect early signs of certain types of breast cancer. These collaborations are expected to grow the benefits of this strategic partnership exponentially in a five to ten year window.

This opportunity for British trade in wider markets beyond Europe is further enhanced by the fact that Lebanon’s burgeoning diaspora continues to grow in influence around the world. Around 12 million Lebanese live abroad, renowned for leading successful businesses. There are 81 Lebanese in the list of the top 500 Arab influencers in the world. “At the same time, Lebanon is a perfect gateway for UK investment into emerging markets where its diaspora in tech are market shapers. The hub sets a benchmark for a world of networked value chains” says Zaazaa.

“Our support for the UK Lebanon Tech Hub will help build a truly global Britain – a nation which seeks to be more outward-looking than ever before and embrace partnerships in every corner of the world.

“Lebanon is a natural partner for the UK: an outward looking, highly educated and highly skilled nation, whose talent is its biggest export. Lebanon is ranked 8th best in the world in early stage entrepreneurship.  Its people are trilingual, speaking French, English and Arabic, making it a perfect bridge between Britain, the Middle East and emerging markets, where they’ve thrived as brilliant business leaders.

“We are also proud to be able to support core innovations and technologies through our funding of £2.5 million ($3.2 million) for the UKLTH’s International Research Centre with the aim of solving worldwide problems, with solutions such as early breast cancer detection and new irrigation systems to help farmers to increase crop yield while saving water.

“I am delighted that at least six of the 77 companies operating in the UKLTH now have a permanent presence in the UK, creating jobs, generating revenue, buying services from UK businesses, and paying tax in the UK, all while remaining rooted in Lebanon”. 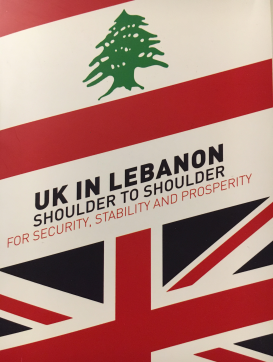 “The UK Lebanon Tech Hub sets a benchmark for a world of networked value chains. It’s a place where an AI engineer in the UK can build a lawyer bot with a Beirut-based startup. Equally, an augmented reality engineer can be enabling the next generation tele-surgery with a Lebanese startup that has gone global.

“The UK is the perfect springboard to help Lebanon’s best tech startups go global. At the same time, Lebanon is a perfect gateway for UK investment into emerging markets where its diaspora in tech are market shapers.”

“Our focus is twofold: getting the best Lebanese innovations to global markets through the UK and leverage the latter’s world class scientific standing to strengthen Lebanon’s knowledge core. This two-way relationship means more FDI, jobs and exports for both countries”.