Students raising money for their prom has long been part of end-of-school-year traditions around the world. Some choose to wash cars or carry out bake sales, but the 2019 graduating class of Notre-Dame de Jamhour had something else in mind this year.

On May 4 and 5 2019, the NDJ college hosted its annual two-day festival, an event that featured artwork exhibitions, an athletics competition, a choir concert, and a blood donation fundraiser.

The fundraiser was launched in collaboration with Donner Sang Compter, an NGO that collects blood for patients around Lebanon and seeks to raise awareness on how voluntary donations can save lives. Over 170 students, professors and members of the college’s administration took part in the campaign.

While NDJ’s administration threw its weight behind the campaign, students were the driving force behind the initiative, the school rector, Father Charbel Batour, told Annahar.

“We didn’t pressure students but rather encouraged our youth to explore, plan and organize the campaign on their own” he said.

The fundraiser was held on Martyrs Remembrance Day, further adding a sense of warmth to the occasion, Father Batour noted, adding that “the administration and student body shared the same values and worked towards accomplishing the same objectives”.

Dani Tinawi, an NDJ supervisor with a long history of blood donations, initially suggested the idea to his students who embraced the opportunity to contribute to a good cause.

Nicole Ashou, one of the students who helped organize the event, elaborated on the rationale behind the initiative, telling Annahar that they sought to leave their mark in the school. “As graduating students, we embraced the idea and shared it with our classmates who joined efforts to help us move forward with the initiative”, she said.

The blood donations, which amounted to 60 liters, will support 500 people in need.

Students celebrated the success of the campaign, with Francois Nehme, a member of the student organizational committee, expressing hope in “instilling a culture of blood donations among Lebanese people”.

“Our journey doesn’t end here, we need to donate blood regularly, not just when there’s an emergency” Nehme said. 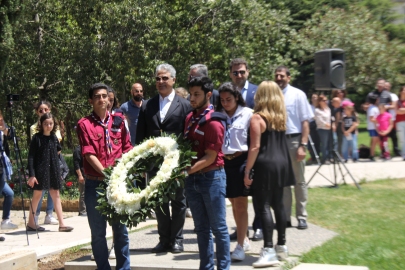 The fundraiser’s ripple effect was evident after five other schools inquired about the project and showed interest in undertaking a similar initiative, organizers said. “We hoped that our senior students would do something memorable before they graduate, and they did, paving the way for the next generation to follow in their footsteps”, Father Batour told Annahar.