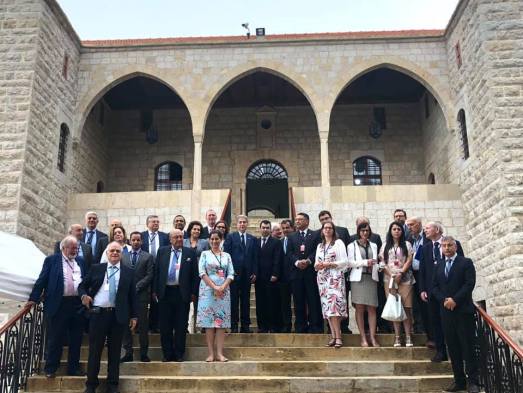 The panelists and speakers then presented their views and debated with the dynamic audience:

The geo economy of the production and consumption of energy has changed in the past 5 years and will be incurring further changes in the coming years. Natural Gas will be a more dominant source of energy in terms of both supply and demand. North America has become a net exporter of energy on a permanent basis as of 2018. Therefore, its energy dependence changes the world’s geo economy. Furthermore, Russia is intensively developing its pipeline network and is becoming a major supplier to China. The Middle East will remain a key and major supplier of energy to the world.

The recent large discoveries of gas in the East Mediterranean basin could be a game changer. Europe, a natural market for this newly discovered gas, will aim to diversify its gas supplies and require new distribution networks, such as the European southern pipeline currently under construction. The GCC countries’ consumption of natural gas will also considerably increase as their economies grow along their growing population. It is more economical for those oil producing countries in the region to export their oil or refined products while consuming natural gas to supply their power generation and petrochemical industries. This key point will definitely change perspectives in the Middle East and a thorough economical, geopolitical, and technical analysis of this new gas era in the Mediterranean region is one of the two focal points of Energy Forum II.

The need for water is going to be another major social and economic issue of the 21st century. Water supply scarcity in the Levant region, including Egypt, Iraq and the GCC countries, is of great concern, and has already caused population displacement, leading to political and social tensions and unrest in the large populated areas of the Middle East. As a result, a strategy to meet water need, security of its supply, and sustainable environmental management of large cities, is greatly needed. Promising approaches towards fulfilling these needs include The Nexus water-energy-food approach and the empowerment of hydro-diplomacy and New Water Masses. Water desalinization will continue to play a major role in the Gulf States as the non-conventional water resource, but carries significant environmental and energy consumption challenges emphasizing further needs to address aspects of sustainability.

Renewable energy by 2040 will contribute to change the geo economy of energy supply. It is admitted that by then, two-thirds of investments by the power generating companies will be in renewable energies. China and India will also be more dependent on solar energy and in the European Union it is expected that 80% of power generation will come from renewable energies. Legislation will evolve in the years to come so will the fiscal system related to energy. Energy Forum II’s objective is to shed the light on recent steps taken by regional governments to promote and facilitate the development of the renewable energy industry and to invite experts to debate its reliability in the medium term.

A detailed report is available for KAMSYN PR’s clients.