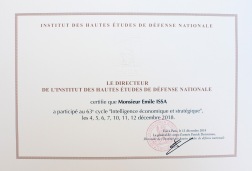 As an established communications and public relations consultant, Emile challenges exclusion, isolation and the status quo.

Emile believes every actor should have a chance to sit at the winning table with qualified communications strategists in their corner; deploying customized, professional and efficient 21st-century communications.

The attention & care Emile brings to the image and reputation of his clients (Decision Makers, Businessmen & Businesswomen, Multinationals, Luxury Brands, Public figures, Artists, Governments and Entrepreneurs) allows him to put at their disposal his expertise and distinctive skill sets to assess the challenges at stake, as well as the potential opportunities to seize, markets to access while crafting the specific Strategies and Messages in order to successfully reach their objectives.

Emile was elevated to the dignity of the Spanish Royal Order of Civil Merit by His Majesty Felipe VI King of Spain, (Officer of the Cross of Civil Merit) by H.E Milagros Hernando the late Ambassador of Spain in Lebanon, in recognition of his efforts and outstanding Merits which have enabled the Embassy to improve its Communications Strategy while also reaching a wider and younger audience.

Emile attended as Corporate Partner the CWEIC 2018, The Commonwealth Heads of Government Meeting 2018, Business Forum in London, representing private clients from the Middle East and Spain, in addition to his work with high profile businesspeople as well as decision-makers, to increase stakeholders’ visibility and activities.

Emile’s understanding of the Dynamics of Storytelling allows him to maximize the potential of his clients’ messages in order to succeed in creating powerful campaigns with measurable Impact in today’s noisy world. (Analysis, Strategic Campaigns, Content Creation & Implementation)

Emile’s passion for new encounters and his personalized Public relations practice make it easier for the various stakeholders who request his professional PR counsel to establish with their counterparts successful longterm professional relationships.

Emile is the founder of the private event Mind Talk which reunites International Professionals, Diplomats, Businessmen & Businesswomen from Lebanon and abroad for friendly exchanges in a refined setting. The meetings are held under Chatham House Rule.

– Associations such as The Beirut Marathon Association  and the Children’s Cancer Center Lebanon St-Jude with the American University of Beirut (AUB).

In appreciation for his contributions to the communications field, Emile was invited to attend several International Conferences representing his clients:

In addition to its Professional Services provided to a Portfolio of Yearly Private Clients, KAMSYN.com Strategic Communications & PR also provides occasional punctual support, courtesy of KAMSYN.com, to special partners. Some of the Latest Highlights:

– Visibility & Support for Caravan Beirut organized by Nour Khoury Jallad &  Mariana Wehbe PR in Washington DC at the invitation of the Lebanese-American Chamber for Commerce, the Mayor of Washington DC Muriel Bowser and the Embassy of Lebanon in the USA.

– Strategy, Concept, Supervision and Media relations for the Spanish Reunion Event under the High Patronage of the Embassy of Spain in Beirut and HE Milagros Hernando Ambassador of Spain in Lebanon. Objective was to encourage major Spanish brands to work together on a new event concept with viral potential: Desigual, Cortefiel, Massimo Dutti, Springfield, Women’s Secret, Mayoral etc.. produced by the Agency “Tarte Aux Poires”.

– Communications, PR Strategy and organization of Ounousa Fashion Awards directed by Yoana Zakhem Halabi, promoting 10 Lebanese Fashion Designers in the Arab World, launched by the Digital Magazine Ounousa , regional leader with more than 14 millions monthly visitors. The Partners of the Campaign were the Lebanese Ministry of Tourism, the Spanish Embassy in Lebanon, The Smallville Hotel, Lumalu Lipstick, Sohat,  Kamsyn & The Agenda Beirut.  The Campaign reunited a Jury of VIPs & major Digital Influencers.

– Visibility for the Conference «Defence & Society: The Swiss Experience, Similarities with Lebanon ?»  given by Colonel Sulser in relation with the Swiss Embassy in Lebanon and the Swiss Ambassador H.E François Barras.

– Commemoration of the 100 years of the Great Famine in the 1st World War in Lebanon with St Joseph University (USJ) and Canaan Family (Restoring Photo Archives and Public Relations).

– Media Support for the 1st Night of  “L’Amateur de Cigare Magazine- France” and Club Los Cedros, Lebanon. As well as many other projects..

– Photography is one of Emile’s passions  view Portfolio

– In addition to the Conferences & Trainings he gives, Emile is also a Writer &   Photographer.

“ADRENALINE 05” with Librairie Antoine, 2007, A photo book witness of the Cedar Revolution of 2005 in Beirut.

KAMSYN’s Network of International experts helps make a Strategic Positive Impact when and where needed most.