It is in a warm and refined atmosphere that His Excellency Hugo Shorter, UK Ambassador of Her Majesty the Queen in Lebanon received us at his residence in Yarzé. This exceptional reception was followed by a cocktail held in the framework of the activities of “British Lebanese Business Group” (BLBG) founded in 2002 as a platform to contribute to the development of Lebanon.

The BLBG supported by the British Embassy, ​​the Credit Libanais, Rafik El Khoury & Partners, Anthony Ussher and British Airways offers Lebanese & British businessmen the opportunity to network and participate in the development of commercial activities between Lebanon and the UK.

After warmly welcoming his distinguished guests, H.E Hugo Shorter reaffirmed the support of the UK for Lebanon and for the humane treatment of Syrian refugees thanks to the recent progress made at the London conference. As the second largest donor in the region after the US, the UK doubled its support to the Lebanese public Education passing from 30 million usd to usd 60 million.

To the equal benefit of Lebanese children & Syrian refugees registered in Lebanon’s public schools. Today, they both receive all their books for free and do not pay for their enrollment that is also covered by the program. Schoolchildren also benefit from the renovation of their schools within the same framework. 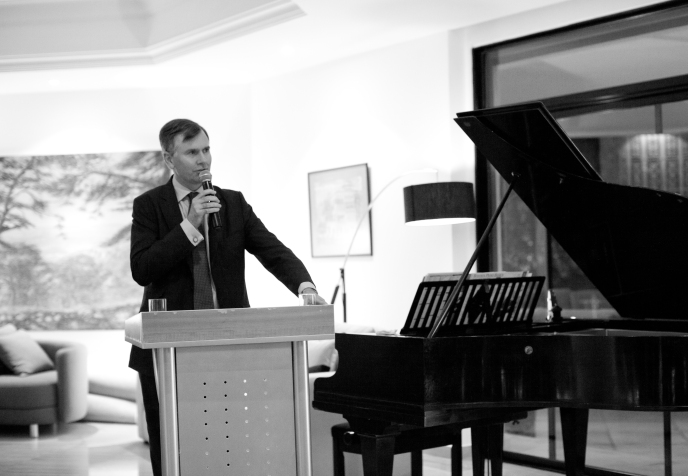 H.E. Hugo Shorter thanked the Lebanese schoolteachers, “Thank you for your outstanding work and your key role in enlightening future generations. You are working hard to ensure a decent future for young people. Your role is essential because you are giving young Syrians the tools and know-how they can use to rebuild their country once they can again return there safely. This is also one of the ways we are fighting radicalization and extremism together. ”

Then, H.E. Shorter extensively thanked the Lebanese Army and the ISF for their partnership with the United Kingdom in their common fight against terrorism: “Thank you for your continued commitment to maintain border security and civil peace while protecting human rights. ”

As to the Lebanese Presidential Election: “It is a Lebanese internal question first, however, the influence of the current regional and international factors add to the complexity of the situation. But the Lebanese have such great energy, resilience and entrepreneurial spirit. That’s why, despite all the challenges, we are always standing by Lebanon and are confident in its wonderful people, potential and future. ”

Enthusiastic applause by the audience was followed with several interesting questions.

H.E Shorter also thanked all the teams of the Embassy and the British Council who constantly work for developing beautiful relations between the two countries.

Welcoming and dynamic, H.E Shorter naturally sat for a spontaneous portrait and a quick chat in front of a beautiful painting by Tom Young representing the Cedars of Lebanon:

“Lebanon is for me a unique country in terms of a diplomatic career. It is so interesting in more than one aspect. It is also an opportunity to overcome challenges, succeed in new initiatives and projects together with the help of exceptional local partners. Beautiful human encounters also bring me great joy; either on the level of new ideas or emotionally. The sense of hospitality in Lebanon is Legendary! ”