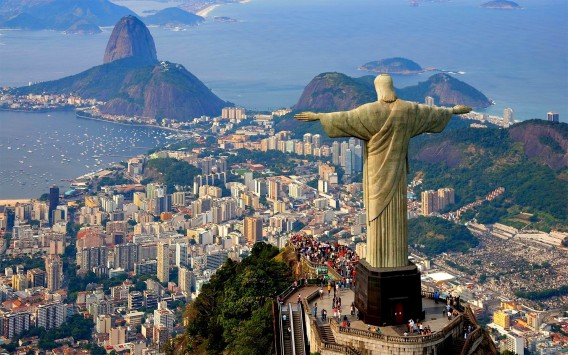 Brazil is a country that has always fascinated Lebanon and the Lebanese. Almost every Lebanese family will tell you it has a close relative who settled there. This country’s reputation is of an Eldorado, rich with stories of Success, Sunshine and Adventure. (French version below)

Take for example the world-famous Carnival of Rio with it’s Samba dance schools. Or Football, the national sport “par excellence” that moves the entire planet including every Lebanese fan of the World Cup. Women volleyball players in string rival with tanned apollos parading on the beaches of fine white sand in Copacabana, Ipanema and Prainha.

Cesaria Evora, The Girl of Ipanema, Henri Salvador and many others have celebrated Brazilian music in a variety of languages and styles: Bossa Nova keeps meeting Brazilian Jazz and classical music on the graffiti colored streets of Sao Paolo.

But apart from it’s Postcard image, Brazil is also a huge country with all the socio-economic contrasts that this generates.

On the one side Skyscrapers, then modern urban Architecture following the legacy of the world-famous architect Oscar Niemeyer.

On the other, harsh yet beautiful favelas revealing the depth of the condition of those marginalized by the system which has been attempting to find different solutions until today.

Brazil is also a rainbow of intense emotions that sweep you off your feet; right away. Where party, love of life and optimism still bloom. A “Caipirinha” drink with brown sugar, lime and Cachaça liquor is sure to make you want to kick-off those dancing shoes. But also sometimes, “Saudade” a nostalgic and melancholic feeling typical of Brazilians and Portuguese would stir-up your soul back into place.

The Amazon Rain Forest is our planet’s main supply of fresh Oxygen. Literally the lungs of our world. 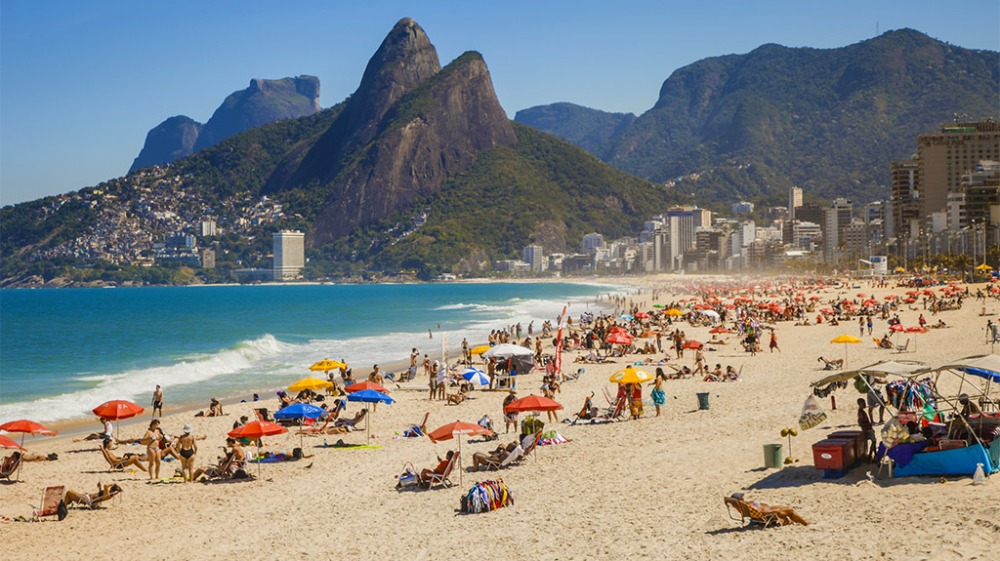 Brazil and Lebanon are similar in a multitude of aspects, of which the mix of  blessings sent by Providence and then the constant challenges that follow. Brazilians and Lebanese, both are Alchemists who transform challenges they face into magical moments of incomparable beauty.

Capoeira could be an example of such a transmutation. Violent in it’s original form, it was a fighting style popular amongst the slaves who’s hands were chained at the arrival of the galleys. Today, Capoeira has transcended into a fluid dance with beautiful acrobatic moves accompanied by a fresh and upbeat rhythm.

Brazil is the friendly country, where the first Lebanese found refuge then settled to escape repeated persecution and famine. Brazil is today the Land of the future and progress; ideal for all those who hope to bring hope and prosperity through their work.

So, filled with curiosity for this beautiful land, we went to meet His Excellency Jorge Geraldo Kadri, Ambassador of Brazil on the anniversary of his first year in office in Lebanon.

Deeply in love with his Lebanese roots (Zahle) ,  H.E Kadri is very close to the Lebanese people who happily welcome him as one of them. Dynamic with a natural elegance , H.E Kadri  is always open to new projects. He warmly receives us at the Brazilian Embassy in Lebanon for the exclusive Interview below.

Why is Lebanon an important country for Brazil?

Representing Brazil in your country is a great honour and privilege for me, because we have very special relations based on a solid friendship and blood ties, represented by about 6 to 8 million Brazilian citizens of Lebanese origin. Therefore, the national identity and the development of my country have relied heavily on the contribution of Lebanese emigrants in Brazil. Thanks to their competence, their work and their culture, they helped to build a harmonious socio-economic reality, tolerant, dynamic, integrated and above all peaceful.

What are the common traits shared by our two countries?

We can’t forget that the Lebanese presence in Brazil began in the late nineteenth century, long before the independence of your country. Throughout the twentieth century, Brazil received with open arms, hundreds of thousands of Lebanese who settled with their families. They also found unique opportunities in Brazil in various fields: professional, commercial, industrial, financial, political and social.

So, the construction of the Brazilian national identity was based largely on that of the Lebanese, with a strong human & welcoming warmth. As the Lebanese, Brazilians like to celebrate beauty, joy and life. Which is also known as “Alegria”.

What are the key projects on which Brazil stands alongside Lebanon today?

Taking into account the importance Lebanon means to Brazil, we have projects in various fields: political, consular, commercial, cultural & educational among others.

For example: the creation of the Lebanese-Brazilian Business Council, which brings together businessmen and businesswomen of the two countries to enhance bilateral relations and promote trade and mutual investment. As part of an agreement with the Mercosur countries, we are in the first step of a process which aims to conclude a free trade agreement between Lebanon on one side, and Argentina, Brazil, Paraguay, Uruguay and Venezuela on the other.

For the first time, a Brazilian construction company Andrade Gutierrez won an international call for tenders for the execution of the Janna Dam. It is supposed to be the second biggest dam of Lebanon and will produce up to 140 MW of electricity. It will also supply the country with 95 million cubic meters of water.

In the political field, during the visit of the Lebanese Minister of Foreign Affairs and Emigrants, Mr. Gebran Bassil to Brazil in July 2014, three international bilateral agreements were signed: a memorandum of understanding for the establishment of political consultations; an agreement that will facilitate the supply of tourist and business visas valid for 3 years (which of 3 months until then); and an agreement on visa exemption for holders of official passports.

Our Foreign Minister Mr. Mauro Vieira, also came to Lebanon on an official visit last September, where he met with Prime Minister Tammam Salam, Minister Gebran Bassil and the President of Parliament Nabih Berri, to enhance Brazil’s support for the stability and development of Lebanon, strengthening the position of our country as Lebanon’s main partner in Latin America.

Moreover, the Brazil-Lebanon Cultural Centre in Beirut, which is the main place of cooperation services and cultural activities of our Embassy in 2015 counted more than 530 recordings for Portuguese courses, dance workshops, Culinary activities and capoeira. I invite your readers to visit us at the Cultural Center in Achrafieh (Mar Mitr Street), for our weekly activities.

Finally, I would also like to highlight the role played by the United Nations Interim Force in Lebanon, UNIFIL. Brazil is proud to have been in 2011 the Commander of the UNIFIL Maritime force,  playing an important role for the stability of the country. Facing numerous threats to peace and regional security, our commitment to UNIFIL has never been stronger.

In a few days our Defence Minister Mr. Aldo Rebelo will come to Beirut for an official visit on the occasion of the Hand-over ceremony of the Admiral ship of command of UNIFIL.

There is a community of descendants of Lebanese origins that is very important in Brazil. They are almost as twice as the Lebanese living in Lebanon. Recently a bill was passed by the Lebanese Parliament following the awareness campaign lead by the Maronite Foundation in the World and local partners to facilitate the recovery of the Lebanese nationality. Brazilians of Lebanese origin are directly concerned..

Indeed, it is an opportunity for Brazilians of Lebanese origin who wish to benefit from this possibility, it is also a source of wealth for Lebanon to maintain strong ties with its diaspora in general.

What are the most promising sectors of the Brazilian economy today and in the near future?

Although it is now the seventh largest economy in the world, my country is going through a difficult period right now. This after experiencing a strong growth of 3.5% annually, Brazil is in recession since late 2014. Brazil remains the world’s fourth largest agricultural products and livestock exporter, we can observe this capacity in the integration of our products in the Lebanese market.

Brazil has the fourth largest shipbuilding industry, the fourth auto market and third in the world aviation industry in the Jets sector. We also have a promising military industry. Lebanon recently acquired our planes A-29 Super Tucanos Sierra Nevada and our armoured vehicles Guarani.

Excellency, what are the aspects that most appeal to you in Lebanon and in the Lebanese?

To answer this question, I would need four hours! (Laughs) In fact, the warm welcome my family and I get in Lebanon has continued to move me and make me feel like home. In general, the Lebanese have a well developed education in various fields, in addition, of course, to the well known fact that a large proportion of them speak at least three languages, something you do not often see in other countries.

In parallel with your busy schedule what are your hobbies? What makes you feel recharged and ready to go ?

As you say, my schedule is full ! So I don’t really have some free time for hobbies. However, I have a good Lebanese hobby : traditional Lebanese cuisine! (Laughs) During my short stay, I acquired the taste of Lebanese cuisine with its so varied and delicious dishes. Otherwise, nature replenishes and inspires me a lot. I enjoy walking outdoors and i’m trying to make it a daily habit.

What would be your best memory so far?

I’m especially grateful to have had the opportunity to discover my Lebanese roots that I only knew from afar. At every meeting, at every visit, I always keep an indelible memory. So it’s hard to classify all these beautiful experiences. I hope I will continue to experience these beautiful moments (Inshallah!) during the rest of my mandate in Lebanon.

What is the message you would send to young Lebanese?

Young people in this country have enormous potential. They are smart, talented, resilient. And they survive in conditions that are not always the best. So I tell them: never give up and always look forward!  It’s up to you to build the future of your country, Lebanon needs you so much!